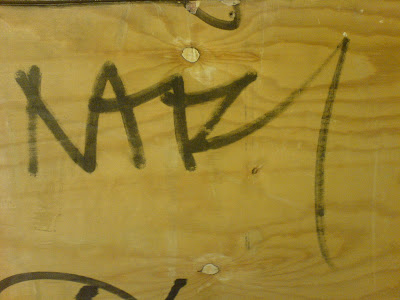 I stayed away from books and films about the Holocaust because the vortex seemed so great. The first image I saw of a nazi mass-grave was when I was at Primary School in Ireland. The spaghetti knotted, skinny limbs are there to be recalled 40 odd years later. It is the most shocking image I have ever seen.


More recently I researched for the Kindness project, and experienced the usual nausea at individuated horrors, numbness when confronted with statistics. I still have a copy of Night and Fog, unwatched. Still have not seen Shoah. Talking to Rabbi F was another turn in this story. This funny, amiable, quick man has provided pastoral care for many holocaust survivors. He talked about the unreachable experiences of these people - that their trauma cannot be stopped but it must be shared in some way. Isnt that what we do with suffering? He told us about one survivor who was one of the most popular people in his community, but who still had a line of locks running the length of the door in his house, to keep out the unspoken menaces of the past. I thought about the ultra-right graffiti that is to be seen demarcating parts of Berlin today.


What is to be done with these experiences and this history - should it be remembered or put to rest? Remembered says the Rabbi: 'Every Jew is a holocaust survivor'.
Later we discussed Palestine and the fear that behind the attacks and the defences on both sides lurks another Holocaust. Is this part of the legacy of the nazis, this fear-filled struggle? Perhaps the next stage of our documenting of Holocaust remembrance should take place on the borders of this conflict - maybe that is the most fitting place for such an 'intervention' - a truly Situationist strategy, where the art still hurts.

Posted by Philip Davenport at 13:58

Email ThisBlogThis!Share to TwitterShare to FacebookShare to Pinterest
Labels: Kindness