There's a cluster of tents around our very grand Central Library in Manchester and a cluster of people gathered tight around the entrance. It's one of the most loved buildings in the city and has been for generations. But right now, it is the site of a harsh scuffle. The Homeless Rights of Justice MCR group are campaigning here for homeless rights. The tents outside the Library and Town Hall are a protest camp in the style of the Occupy movement. The tents are tied to traffic bollards, to secure them in this concrete environment. They seem frail, flapping and billowing in the wind, among towering office buildings. And there's yelling from the Library entrance.


"We're raising awareness about homelessness in Manchester. We're shouting out to the Council, but so far all they've done is evict us two times. Now they've blocked our access to the Library, we can't even use the toilets. And these buildings are the place we need to go for homeless assessment..." (Joseph, homeless protestor)

Two little gangs of people move back and forth in the Library doorway: two policemen and two security guards facing off ten or so homeless protestors, two observers, and in between, members of the public, squeezing through into the building.

"I'm a homeless, disabled woman and now they're denying me access to the toilets in the Library. I feel victimised, discriminated against. I'm a rough sleeper, I get guys coming onto me every night. The Council? They need homeless people because they take the money off the homeless charities, they get the profits. There's cuts for homeless services everywhere... they're getting shut down." (Homeless protestor, no name given)

Steven Peers of the Green and Black Cross project, which has been observing the protest with an eye to the legality of the security and policing: "We believe this is a breach of human rights, it's degrading for people, having restricted access to toilets. Being denied access to a public building - since when have public buildings become private? Seems a legal grey area. G4S (security) are excluding people, they seem to be misusing this court order which does not specify these measures."

The arthur+martha project The Homeless Library is also attempting to raise awareness of homelessness, to tell a history that's been ignored. I asked protestor Joseph what reason he'd give for homeless people being overlooked. "In this society we're in, people have to have a house, a job, and children. Over and over. They're puppets. Because we're homeless, we don't do that. They don't know what to do with us. We're looked at like the pigeons, the vermin of the human race. But I am a person too." (Joseph, homeless protestor)

Standing to one side, a woman is leaning against one of the vast columns outside the Library smoking a cigarette, quietly watching. I ask her if she's involved and she shakes her head: "I moved to Germany from here. Don't see homelessness like this over there. I think government here has lost sight of its priorities. And the first priority should be looking after people. I know several homeless single parents who can't get a council house and the rents on flats are too high. I see more and more people sleeping in doorways. What the way forward is, I don't know. Homeless people can protest, but this needs wider support - they need everyone's help." (Onlooker, no name given)

And she goes back inside the Library. And I go into a cafe to write this. And the protestors are still there, outside. 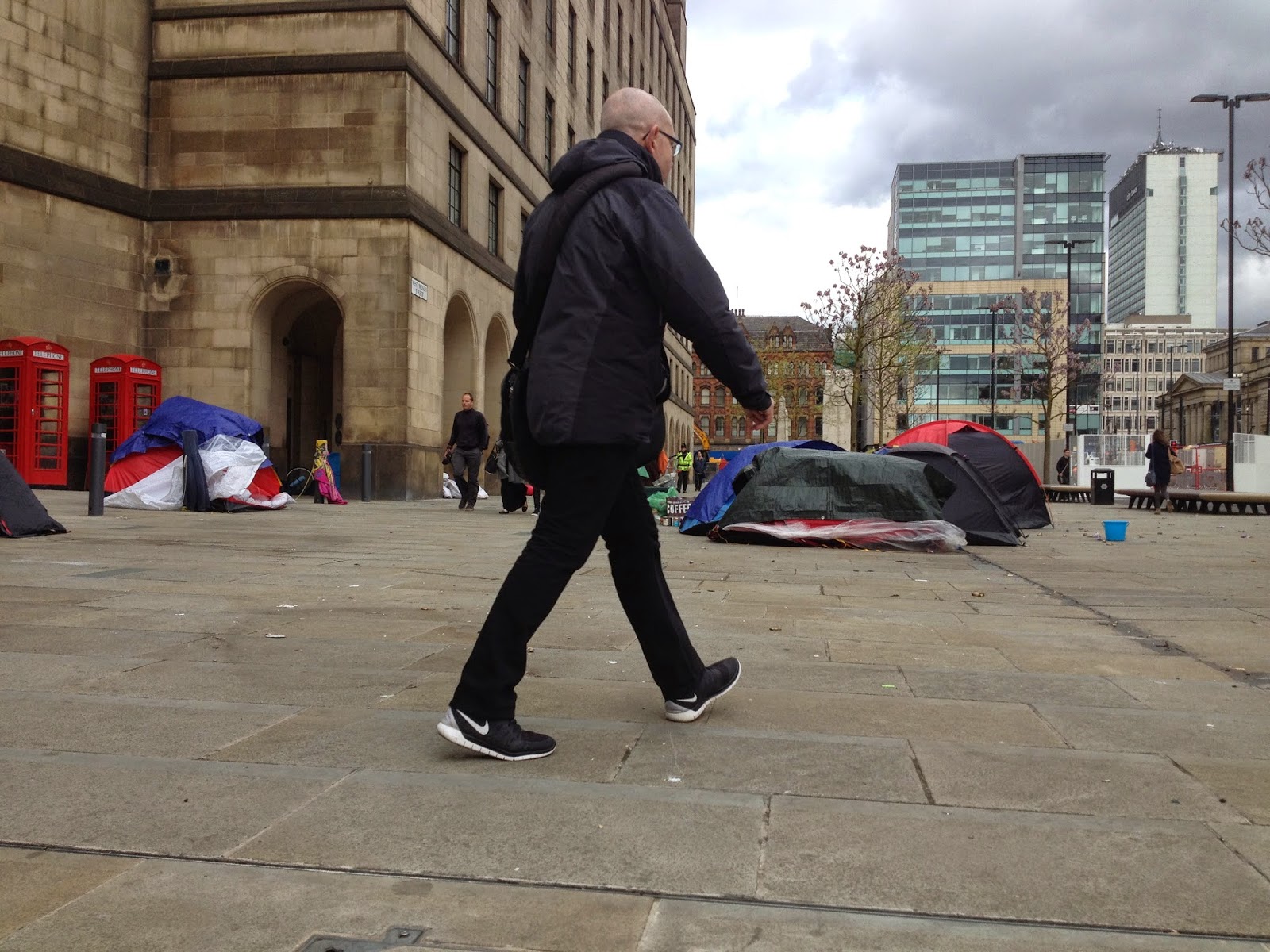 The arthur+martha project The Homeless Library is the first ever attempt to write a history of homelessness in Britain. It includes not only individual testimonies, but also poetry and art, giving it a shape like no other. Look for more related blogs on this site, or befriend us on FaceBook.

For further information on organisations referenced in this blog, go to:

Wikipedia on the "Anonymous" organisation http://en.m.wikipedia.org/wiki/Anonymous_(group)


The Homeless Library is a project devised by arthur+martha to document the heritage of homelessness using interviews, artworks, poetry. It is supported by the Heritage Lottery Fund.

I visited the Central Library yesterday and was taken aback by the police presence. When I asked one of the PCs inside the doorway why there were so many police, she told me that the homeless protesters had been blocking the Library entrance earlier on. Whether this was a made-up reason or whether that actually happened, I can't be sure; either one would be believable.

Anyway, it got me thinking throughout the rest of the day, which I suppose is one of the aims of their protest. And ultimately, I arrived at the conclusion that I don't really have much sympathy for them.

As the 'onlooker' in your article rightly states, it is a complex issue - sure. However, I cannot get past the idea that at least some of those homeless people outside Central Library have, in one way or another, helped to put themselves into the predicament that they are in. I recognise a couple of them as being consistently homeless throughout the past several years within the city centre and Joseph, in your piece, espouses a good example of the kind of ethos which puts me off. If somebody has chosen to not play by the rules of our society, what debt have we to them? Are we supposed to just give them whatever they want with nothing in return?