"Make me think truthfully and make me open."

"I have trouble writing, but you've helped me get the words sorted. Getting this down on paper is important to me. It's like thoughts in your head otherwise, no good. It's better to share it. It's taken my mind onto other things. I've had a smashing time - and you know how jumpy I am."

Both of these quotes are from homeless people who took part in one of our workshops for The Homeless Library. I will try to tell the longer story behind these short quotes, try to do them justice.

It is very difficult to put my feelings about these current workshops into words, even though I am supposedly a word person. I guess I'd say I'm grateful, first and foremost. Grateful for the effort these small triumphs came out of - and grateful that I don't have to deal with the circumstances that many of our participants face.

We currently run our workshops at The BoothCentre in Manchester which is a safe haven, a drop-in centre for homeless people. However the life on the street that some of these people step in from is - to put it mildly - not safe.

The first quote comes from someone who is separated from their child and is haunted by that fact. A very powerful person, physically strong, strong voice and forceful personality. Can be very disruptive, can be very gentle. To see that life experience filtered into delicate drawings and a handful of heartfelt lines is moving beyond words.

The second quote is from somebody who is very jittery around groups of people. He has had severe depression while on the streets and relies on medication and solitude to maintain equilibrium. Physically small and painfully thin, he nonetheless has a strong presence by virtue of his intense, intelligent eyes. We talked during breakfast and he confessed that the loneliness was getting too much - "I need to be around people again," he said. "I think I'll join in with you lot for a few minutes." After staying on for the full two hours of the workshop, he told me proudly that he had got through it without taking any of his medication, so that he would have a clearer head for the art-making.

We have run sessions with people who have been raped, urinated on, stabbed, axed, routinely beaten, someone was even burned alive. People have been arrested, sectioned, evicted, dispossessed, many times... To even begin to understand these experiences is not within the power of my words. A more accurate kind of mirror of it is to be found in people's faces and mannerisms. Sometimes a look or hesitation says far more than saying.

To be around such a lot of damage has sometimes left Lois and myself dazed with sadness. Then to see a face shining with delight in our workshop - such a moment feels like a hoorah for each and every one of us, not just for homeless people, but for people full-stop. 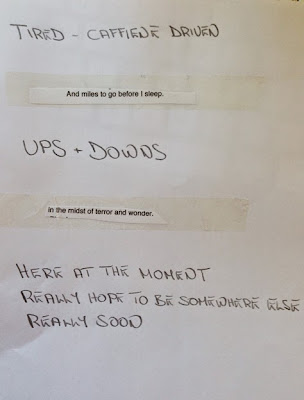