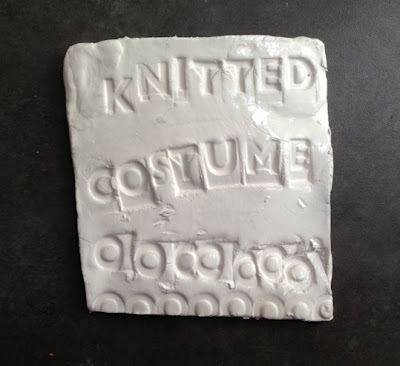 We've been making mini-poems on ceramic tiles, working with older people who have a dementia diagnosis. The pieces recall the tiled walls and pool interiors of old swimming pools and the public wash houses that were sometimes next-door to the pool.

The tiny poems can be read singly, or else as units of one larger poem. For people who might struggle to maintain attention for a long time, and additionally have some physical problems (eg. eyesight, arthritis) very compact written pieces are a good method. The poet/artist Ian Hamilton Finlay is a wonderful source of poetic strategies that are short but resonate with much bigger ideas. 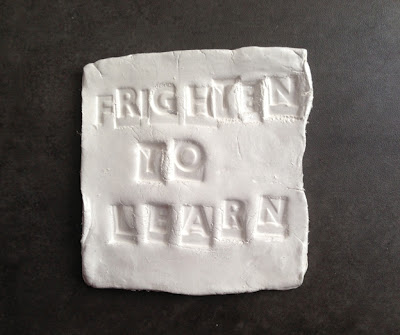 Both groups we worked with were full of enthusiasm for public baths as a conversation topic, but the conversation swam off into directions we didn't expect. For a start, many didn't know how to swim because the school gave them a few sketchy lessons and left the rest to their parents who were too busy to teach their kids to stay afloat. So what we might now think of as a universal play experience was fearful to some. A second surprise for me was that alongside many swimming pools, wash houses were also to be found, sharing a boiler room for that rare commodity hot water. The wash houses provided the facility of a bath for people who didn't have such a luxurious thing. In the wash houses, people also did their laundry. Sydney recollected: 'Women with big arms, mangling.'

The pieces were made by rolling out some air dry clay, cutting out a square and then using old printers' typesetting letters to print words into the clay surface. These poems were only one or two words long, so the choice and the treatment of the words was very important. People selected a short phrase from their reminiscence that had particular meaning to them. The writing process added another layer of meaning – for some the little metal print blocks were a confusion and their lettering 'took a walk' – which added incident and emphasis in unexpected places. 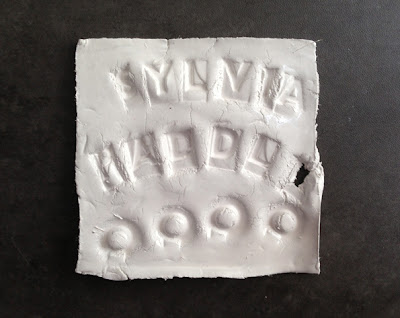 One of the pieces that gave me (and the maker) much pleasure simply said 'SYLVIA PADDLE', the words accompanied by a line of circular marks like punctuation morphing into bubbles. Sylvia explained that this little statement felt like an order – she didn't enjoy swimming and this was an instruction to get in the sea, do what she was told. I like the way it is in the present tense, as if the memory Sylvia is still here, still on the verge of being told what to do, or resist.

Another of these mini-poems is 'BITTER RIVER', the words arcing across the tile like water in a valley. And in fact this was a reference to swimming in a bitterly cold river valley up on the moors of childhood. To my mind the phrase also conjures the bitterness of salt in the sea, of chlorine in a swimming pool and of the carbolic soap, beloved of many mums in the era. 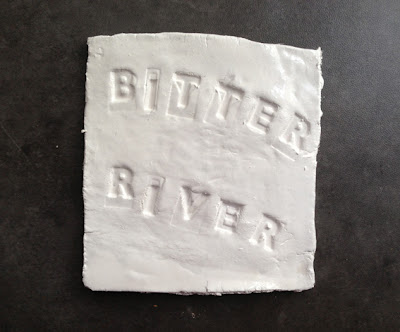 Posted by Philip Davenport at 03:01