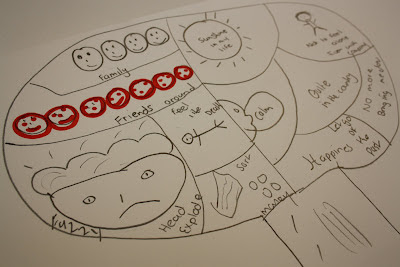 “It was really good, imagining... I can't find the words. It touched me. Bringing back old memories, old happiness. I find it hard putting it all down on paper. Didn't think I could do it, but I did. Interesting, the old photos. Thinking of other times and other lives. I've started writing again because of this. Getting poems going, I'm always scribbling in my book.” D

“It opened your mind, to think of the good times. Put the bad to one side for awhile.” G

This was a light-filled little day. It’s often the best way for good things to happen creatively, when people are feeling relaxed and open to possibility. We tried out a whisper game with a couple of poems; wrote childhood memories onto vintage photos from the local history archive and devised some self-portraits in words.

I often envy musicians because their work is to ‘play’, with all the connotations of that word. Play is a childish act and can bring the freshness of childish experience. The looseness and humour of play is a good way to be in the world. It's my responsibility to move people in and out of the creative space without hurting anyone and play is an excellent means to do just that. But mostly, play is fun.

I'm writing this on the train on the way back from Blackpool, in between reading through the pieces people have written. I'm struck by the poignancy of the writing. There's much subtlety and sly humour. Beautifully effective writing too, not a word wasted. It's as if sidestepping 'seriousness' has in fact put us right into the middle of it.

In any case, the best things happen without forcing them – so this week was one for play. Doing it and writing about it too.

“I'm still there in the past, in my happy moment. That's the point isn't it, to bring me out of myself into something good.” L

“First music? Sitting cross-legged in primary school singing Morning Has Broken and He's Got the Whole World in His Hand. Innocence.” Neil

Emily led the sessions today, focussed around drawing to music. We talked about what music means to us, devising personal playlists and the memories they trigger. In my mind's ear I heard Bing Crosby singing the story of the three little fish who swam over the dam. The memories that came first to people were child memories, suffused with affection. Bees in summer - magic flowers buzz. But the same person who'd sung hymns at school also recollected a harsher period of his life as he made his his drawings: “The pictures are angry. This flower looks like a poppy, like blood from the sky. It's how I want it to be. It's what I'm seeing as I follow the paint.” N

Another person remembered: “The school I was at, they wouldn't let us listen to music or watch television. I didn't discover music til I was 16. I hated that school, I ran away as often as I could. When they caught you, you had to stand outside in the cold with your PE kit on. But I kept running.” E

It was a delight to see people come alive in the music, dancing as they worked. The pieces danced too, embracing rhythm as part of themselves, along with line and colour. Emily made some little movies with her phone, catching the moment. The more adventurous artists gave others courage to go further; the contemplative people gave others incentive to go deeper. At the end of the session, someone said to me: “Thanks for the chance to do this, for the freedom. I can't make things like this at home.” N

But in fact, it was the group that freed each other.

We have a regular little conflab late morning in the cafe. It's an informal time, and people are starting to use it to say what's on their mind after the creative work. G remarked: “It's opening me up, this writing. I've been on medication for a long time and I forget things. But they're coming back now, with the writing and drawing. I'm letting them come to the surface. It's like having something packed away in the attic and letting it into the light. At first it was the bad memories, but now it's the good ones too.” G

Or to put it another way: “The first record you bought. The first song you bought for your girlfriend. What it means. School holidays in the summer. Walking down railway lines, or river jumping. Good times, a good life.” N
Posted by Philip Davenport at 07:04