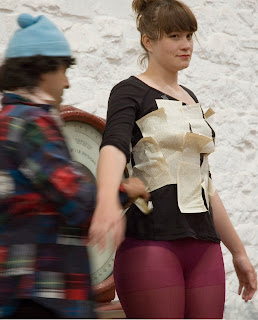 Walking over to The Red Door, feeling nervous. Don’t know what this meeting will be, it’s throwing dice. We’re bringing artist Rainer Ganahl into a homeless drop-in centre in Bury. Rainer is obsessed by Marx and Engels, he’s locked into the books, into that moment, floating it alongside our own time. His work in Bury shows the Marx/Engels classics heaped in vitrines, with similar literature.

Engels’ work describes the plight of a whole people, the working people of Britain, as they struggle to feed the industrial processes of the 19th century – and desperately to feed themselves. Engel’s The Condition of the English Working Class is an angry book, outraged by the stories it tells – people living in holes in the ground, dying starved, diseased, trodden down by the ‘good’, or ignored. It’s Darwin’s fight for survival on a human scale, and like Darwin it is the beginning of a theory that’ll change everything.

In 2011, the British people who live the life closest to Engel’s descriptions are the homeless.

The group at Red Door shape-shifts around Rainer G as he leads a reading aloud of Engel’s words. Two young girls sit on a sofa; they jolt involuntarily when we read a section about prostitution. A leans back in a nearby armchair, his expression veiled, but listening intensely. He won’t say a word until the teabreak, away from the others. K and R sit at the table with Rainer, Lois and myself. A volunteer who’d recently been homeless comes in and out of the room as his chores permit.

Ganahl is an imposing character, brimmed with mischievous energy, his head planted with a bright blue woolly hat like his own personal blue-sky weather system. He’s such an alien presence that people don’t quite know what to make of him, unsure what signs to read.

What we do read is Engels. The stunning brutality of those little vignettes send us into a horrible lulled trance. (A woman found dead under a blanket in her room, with her children, all starved.) People abused and abusing to the point of raw mind-sickness. Between the readings come back parallel stories from the people in this room, this NOW. Tales of streetlife, blurred with shaky emotion, drugs and shock.

For myself, the most moving point comes when I go away from the table to stand outside for some air with A. Between drags on a cig, A tells me about the hostels and rough sleepers he’s met in North Manchester, on the same journey he himself has made, with nowhere home. ‘People under umbrellas, people in plastic bags, anything, trying to keep warm, keeping dry. Seen them at night, some died. From the 19th century to now, it’s not long is it? Not a long distance we’ve come.’

Through the 2 hour session, K sits directly opposite Rainer, listening and responding to the history book with his own life. When Rainer talks about the rough clothes working people wore, K shows us his fleeces, jammed under his anorak in layers to keep in warmth. He’s sleeping on cardboard at the moment; when he gets too cold he’ll walk around town to restart his circulation, recharge the warmth in his muscles. As the session continues, details of K’s life emerge: successive jobs, redundancy, substance abuse, a spin down into homelessness. K reiterates many times that he has a drink problem. Eventually Rainer interrupts: “Is the homelessness your responsibility alone, or is it systemic?’ He repeats the word SYSTEMIC.

K shakes his head, unable to accept this new possibility: ‘I’ve gotta problem.’ It’s a saddening moment, the nastier side of psychotherapy culture, of ‘owning’ your problem. I think back over the many conversations we’ve had during this project around the crucial question: why are you homeless? How many people pin it to their own personal failings – marital breadown, substance abuse, job loss, bad health, bad timing? But is that really the whole chapter and verse of the story? The society system we live in has a part. Shouldering the thing yourself is a crushing burden.

After the session, Rainer and I talk about how it went. He chides us for being sentimental. I chide him for not listening to people as fully as they need.

Evening, I come to another Engels reading that Rainer has convened, this time with artists from Manchester. There’s a student-ish atmosphere and I take great joy in close-reading the text, a process I’d usually apply to a poem. We touch on Engel's dubious references, naivity, and the naturalisation of predjudices against the Irish. It’s a pleasantly academic discussion, though once again dominated by one person. A large Germanic art pixie, the charisma gathers round Ganahl like a crackle in the air. Likeable/dislikeable, charming, pissy - a man with enormous focus, though one who doesn’t listen well because his own head is raging with ideas. He is a lightening conductor, but this second group contains no real electricity; the charged moment has already occurred. What fixes in my memory is walking with him through that red-painted door.

At the exhibition launch, Rainer dresses a young artist, Laura, in pages from Engel's book, ceremonially recalling the fustian clothes worn by the poor. But it also harks to K's layered fleeces, proofing him against the night chill. The performance is a witty piece, sharp and rather knowing. I wonder if K will have to walk around tonight to keep himself alive; the day's been rain-drenched and the evening clouds are ominous.