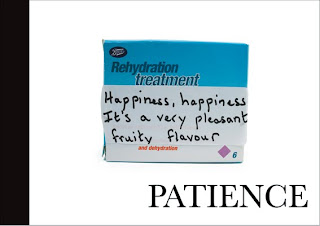 Matt Dalby is one of several contemporary poets we asked to repsond to PATIENCE. Here, Matt traces a path between two pieces: Be Patient by Margaret Hargreaves, the poem that states the theme of the collection, and a self-exploration of Parkinson's Disease by Doreen Jones, Thee Thy Summer.

Margaret Hargreaves’ Be Patient includes the line ‘was a dressmaker’. There is a sense here that Margaret may no longer be who she was, or at least may feel she is no longer who she was. But it is not a sentimental, nostalgic, ‘when I was younger’ reverie. It is a lot more interesting than that. Here are skills and experience, here is something that makes the loss or impairment of capabilities with illness become more real. Here is something that is often hidden.

Anecdote. An elderly Muslim man in Trafford walking slowly around two parks supported on either side by two young women who appear to be his daughters. The sight is only striking because it is so unusual.

‘I call myself
a quiet person

was a dressmaker
if a stitch went wrong
I set it right
in two words, two small words’

But without knowing the author, and without knowing how the poem was put together it is a dangerous assumption to make. And even if it were a simple statement of fact about the author it only provides limited information. Many people could say ‘was a shop assistant’ and it would tell you precisely nothing about them.

Even so, this is a relatively straightforward poem in comparison to a poem like Doreen Jones’ Thee Thy Summer, which is much more fragmented. Thoughts are abandoned partway through, broken into fragments, and revisited later. The kind of fractures recur throughout the collection. Numbers play a large role in the text, as if they are fixed points within a generalized confusion:

Some numbers, especially 21, recur in the poem. So too does 7. The poem itself is arranged in six stanzas of seven lines in pairs across three columns, which might be read as three sonnets. But there is an ambiguity introduced by fragmenting the poem that means the poem need not be read down each column in turn running left to right. It is also possible to read each line across the columns, or the first stanza of each column in turn. Both of these reading give a poem in two halves of 21 lines each.

The first stanza gives a good sense of how the poem is constructed, and contains words and phrases that recur in the rest of the poem:

’21’, ‘make sweet’, ‘thy beauty’, ‘parkinson’s you see’, ‘started’, ‘vertigo’, and ‘parkinson’s’ all appear again. Even while broken into pieces the poem circles itself, its own areas of concern, giving it a unity and coherence it might initially seem to lack.

This does not seem designed to imitate any particular mental confusion so much as it feels like an act of resistance. Illness is defined more by medication than by symptoms, and both are an inconvenience. And here and there some aspect of a person (the subject of the poem? the author?) keeps slipping out. This is not loss but an ongoing negotiation with life and illness.

From the four sections I have read this idea of an ongoing negotiation with life and illness is a consistent theme throughout the book. For me this allows for a far greater human interaction and identification with the experiences of the authors than some sentimental veneration of their wisdom and remembrance of things past. To acknowledge the frustrations, pain, anger and limitations of age-related illness is surely more healthy than a vague sympathy. It does not make for a comfortable read, and the poetry is not instantly recognizable as the personal reminiscence and anecdote in conventional forms you might expect from a project of this nature. To my mind this is a good thing. It is more interesting and compelling for the reader.

It would be interesting to know whether the experience of creating the book was more satisfying for the participants than just writing a set of conventional personal reminiscences. Certainly one of my initial thoughts in response to being approached to comment on the book was that experimental approaches, being less codified, less familiar, might be more accessible than more conventional poetry. We all have an idea of what conventional poetry should look like, and that it has a number of rules that we do not understand. These preexisting ideas can limit what we feel is possible, and therefore what we ultimately produce. Whatever the truth, the more experimental approach has led to a book you are actually likely to read and return to, rather than pick up out of sympathy and never open again.


Matt Dalby is an experimental poet whose works take shape within multiple approaches and mediums, including sound and visual making. His blog Santiago's Dead Wasp is a key journal of experimental writing and related events in the North West of England, as well as a document of Matt's ongoing project. His extraordinary communal Mutapoem is world-embracing.
Posted by Philip Davenport at 08:00