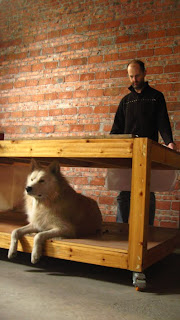 Koko (pronounced Q Q) is the studio dog, a big, handsome, raffish-looking hound, white fur and brown eyes. He paces the studio like Beuys’ wolf – chewing bits of bric a brac and seeking attention in a series of random acts of naughtiness. Somehow he’s ended up as a mascot/guard dog here, though his owner Jiang Liang Liang (as I’ve been told to call her, tho Dan Dan collapses into hysterics of laughter when I use this name) still comes to walk him and incidentally to clean the studio too. It’s another story I don’t fully understand.

Koko is clearly in need of more walking than he gets, and as I love walking, I offer to take him around today. An offer made out of naivety with no serious consideration of consequences. (Why do I so often seem to default this excuse?)

Once we step outside the studio and start dodging early evening traffic, Koko has a trial attempt to wrench my arm off with a bid for freedom. We head for Longyin Lu, but once again are destined to fail. Koko doesn’t want to go to Longyin Lu and clearly couldn’t give a toss about the mystic Yangtze. Koko wants to find the University park and the girlie dogs. And so we go to the University park. Just before we cross the road I see Yan Yan waving us a reluctant farewell - like a parent leaving a child off at school for the first time. I’m not sure if the wave is for me, or Koko.

Nobody mentioned to me that many Chinese people, at least in Chongqing, are nervous of dogs, especially ones that look like barely controlled wolves. Add to this my status as a freak occurrence in the daily street life, plus the rapidly failing light and we amount to a visit from the circus. We actually cause two eruptions of screams among the students, which Koko exacerbates with a few good-natured lunges at people’s crotches. Finally, he pisses in the flowerbed right next to the sentry box, complete with glaring guard, as we leave.
Posted by arthur+martha at 04:14

What have I let myself in for!