My host is Yan Yan, an artist I first met in Manchester and immediately warmed to with that curious chemical reactivity that we humans occasionally have for each other - he whisked me from the airport, cackling at my reaction to the mayhemic traffic. He is a slight man with an elfin face, full equally of intelligence and a kind of jauntiness.

Chongqing at high speed, accompanied by constant traffic blare. As will often happen in this journal, my words fail. I cannot begin to make a word picture of the complex city that we sped through, the busy-ness, the colour sequences, the pungent smells both mouth-watering and bilious, the goneinaflash faces and scenes. It was as if I was suddenly granted a new colour.

The evening meal was my introduction to Chinese hospitality, Chonqing style – which means hotpot. But this is not hotpot in the Lancashire sense, this is a pot that’s kept hot by means of a powerful gas burner underneath – each course is added into the pot, into the same cooking sauce, which becomes richer as the meal goes on. A gaggle of art students had come along and I insisted we talk about poetry, poor things. Not only that, but experimental poetry. 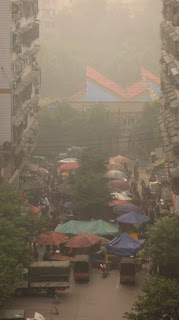 I woke to the sound of a strange keening song, played through a distorted speaker. The origin wasn’t to be explained on this day, but would come later. Getting myself over to the studio was a major feat of will. I was walking streets that had very few of my recognisable markers. To stop navigating by street signs and use landmarks instead is a kind of leap of faith, back to pre-language self, steering by eye and the other senses. I find that smell is important here – particular restaurants have a style of sauce and that is a location clue.

The studio is fabulous and deserves a journal entry all to itself. I played about with ink and paper for most of this first day. Chongqing has a well-known art school and the area around 501 Studio, where my residency is to take place, is peppered with little art shops. The art materials are cheap here for a Westerner, which takes some pressure off the making process. Added to this was an unexpected serendipity - my Chinese communication skills are such that I didn’t end up with quite the things I intended – but the things I got were better.

My brilliant mistake was in selecting large sheets of tracing paper rather than plain white. When I got them back to the studio I realised that what I had was a kind of 3d paper – which when inked on both sides would become a see-thru poem. I got to work at once, bastardising together bits of conceptual art, imagist poets and of course a slew of Chinese poets, esp. Li Bai.

Inbetween all this, I worked on my ongoing project, Spreadsheets of Light, poems written using Excel. I’ve already done a little preparation work for a Chinese sequence of these, and so started right on in, borrowing a computer from Dan Dan, one of the students. .

Returning home that evening, I was excited by the pleasure of moving through this alien environment. The street vendors have stalls all the way down our high street and I picked my way between the many obstacles that the stalls present – the most worrying being electric power cables, which are impossible to see in the dark, but very possible to trip over. While looking down for trip hazards, I banged my head on an awning. The sudden pain burst my little confidence bubble and thrown by it, I missed my turning. It took an extra 15 minutes to locate the uneven steps that enter my block. In that short time, the newness of everything lunged in and I felt tired, baffled, defeated. I slunk into bed and slept amid miserable dreams.
Posted by arthur+martha at 02:08