“I am sitting in a room” 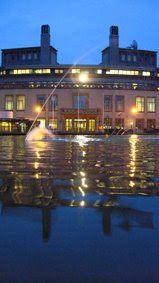 I’m sitting in a room with a soundproof glass window for a wall. In front of me, maybe four metres away, is man seated with his back to me. His name is Vinko Pandurevic and he is both a witness and one of the accused in a war crimes trial. His face and his voice are relayed electronically to myself and the others in the public gallery of the ICTY (International Crime Tribunal for the former Yugoslavia) here in the Hague; seated around him is an arc of legal professionals, translators, security guards. The voices in the court bounce through many translations, which cut across each other, creating an unreality of disjunct voices/mouths, part-seen faces.

The man wears a pinstripe suit and is heavy-set, with a closely shaved head. His face, which I glimpse through the monitors and have seen numerous times on television, is prison pale, his eyes mostly look down. He seems sullen, but then there are flashes of humour and intelligence – and something else, a kind of charisma, but muted. The suit and the bulk of his shoulders makes him akin to oldtime gangsters.

Pandurevic is one of several men on trial for involvement in the massacre of thousands of Serbian Muslim men and boys in Srebrenica, summer 1995, July 13 – my birthday.

This is the first time I have been in a courtroom and I don’t quite know why I’m here. Perhaps it’s no more than instinct, the sense that this connects to the Kindness project, to all the people we’ve worked with in recent months, that what I’m doing is a kind of pilgrimage on behalf of them and those who’ve suffered like them. Or am I here for more voyeuristic reasons? The common denominator of the former Yugoslavia and the nazi state is genocide. But this is living, breathing a few steps away from me, arguing the legalities.

I sit here and Pandurevic sits there. The Prosecutor takes a long, long time to ascertain information about the locality of the killing. Using Google Earth images he tries to coax Pandurevic into agreeing that yes this was the place and yes these were the houses and yes this was the hotel and the post office… The General disputes every point: the photos are cloudy, so is his memory, he wants to be careful not to say anything that incriminates himself…

It is a painfully drawn out stop-start of legalese and fine detail. I drift a little, watch Pandurevic’s back, his hands, the leather soles of his shoes as he wriggles them under his desk. I wonder if the movement of his feet give some clue as to what he is really thinking? He sits there on one side of the divide, I sit here and the estranged voices swirl. I’m reminded of the sound work by Alvin Lucier – “I am sitting in a room” - and the layered, blurring voices abstracting. 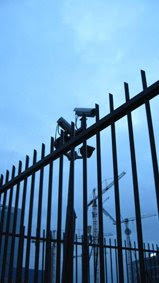 Earlier on this morning I talked with a young legal intern at ICC nearby, where the Lubanga trial is underway. Thomas Lubanga Dylio is on trial for enlisting children in the Congo to become soldiers. The intern said that she wanted to keep working at this kind of trial, preferably in countries at war. I asked her didn’t she found the work upsetting? Weren’t there less grim ways to make a living? She said that she came from Uganda, and I wondered if there was an unspoken answer in there. Then she talked about one of the witnesses from a previous sitting, an African man who was taken prisoner by soldiers and was asked if he wanted to live – having said yes was submitted to four hours of rape by soldiers in front of his family, then they raped his children. It was upsetting to hear, she said. So I watch Pandurevic, try to imagine the human impact behind the dullness and the pretence of what is being mouthed.

The Prosecutor sits down and the Defence launches into Pandurevic with sudden and astonishing spite. The sleepiness in the room dispels and the General is fighting for his own life, his freedom as the attack mounts in ferocity – “Why did you lie, General? Why did you lie? WHY DID YOU LIE…?” And the question hovering over it all – will he finally crack now – will he give the great answer that we are all waiting for at every such moment? The answer to the question – why do human beings DO such things?

But this is an impossible answer, and anyway today it is stalled again not just by impossibility but also by the recess. Pandurevic stands, a big, big man flanked with guards and his eyes flick past me and around the room, measuring the field.

I go downstairs to Courtroom One, where another trial is underway. The man responsible for bombardment of numerous civilian targets in the former Yugoslavia is arguing that he didn’t do it – the whole unfortunate thing was due to a simple mistake in communications, he says. He leans in close to the microphone and the saliva sound rustles in the Public Gallery.

It’s mid-afternoon. I ride the tram across Den Hague, intending to go back to the ICC but partway there I’m overcome with exhaustion. Instead, I catch the train back to my borrowed house in Delft and I go to bed. My head is banging and the images of the day replay themselves and over the top of it all is Lucier’s mantra – I am sitting in a room.

For further information and video recordings of hearings go to:
http://www.icty.org/
http://www.icc-cpi.int/
Posted by arthur+martha at 02:52