Kept in the dark 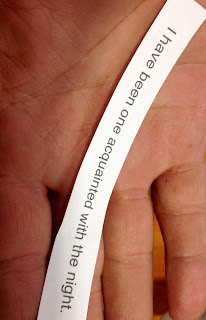 This is a conversation with an anonymous contributor to The Homeless Library, who uses the support and various facilities at The Booth Centre. He asks - why are so many people homeless and who should count them?

What's the population of England? 60 odd million. And some again, uncounted.

This is a good place to start on issues. Count. If you go to a shop and buy something and you don't put the right money on the table what will happen? If you insist it is the right money the guy will say either you can't count or you're lying, which is it? This is the same thing. Official figures say that homelessness is this. But the real homeless figures are going to be around 2 million in the UK. It's unbelievable but it's true. People are on the street day and night.

How long has this been an issue? Centuries, centuries. If you're not going to face up to the problem, then not counting is a clever approach. Just don't acknowledge it. You see 1 million people homeless and say it's 1000.

There is accommodation available but they'd sooner put you in prison or have you begging. Then you're making your own money and hopefully for them you're not visible. When you've got money you're not visible, you're shopping or buying drugs. If you've got money and you're on the streets then you're less visible than an obvious beggar. Say you're selling drugs and you're not on benefits, you will not be seen,  you won't be counted. That doesn't mean you aren't homeless. People don't like to look at homelessness, don't like to look at begging, its not nice. People don't like looking at the homeless, especially in London in all its glory.

Other people cry their bloody eyes out to see it everyday. The same old people and new people coming in all the time. Even if they make money, they're still stuck there. And if you're on the streets with a fortune what do you do then? - you become a heroin addict or whatever.

How many homeless people in the UK do you think are drug users or alcoholics? You don't know that either, and that's the point. You think if you looked up statistics it should tell you. But in all this world where do you find an accurate reflection? The research work is going to be flawed quite obviously, if you're starting off with the wrong numbers.

Transience has probably increased. You got the same people have been transient many years and then more and more from hospitals and prisons. If you're not registered homeless how the hell can you be included in official statistics?

How would you count them? You'd count when you are out and about. You'd ask people where are they stopping how long they've been on the streets and do they know anyone else similar and where would they be? People are usually happy to help, although they won't say everything because the only privacy they have is others not knowing where they sleep. The ones who disappear into the night.

In all honestly I think people don't want to feel the embarrassment of talking about homelessness. If everyone in this room had lied for 40 or 50 years on a certain issue how would you raise that issue? How would you approach it? I tell you what you'd do. Rather than embarrass yourself in front of everyone you'd lie too.

Interview with Phil Davenport at The Booth Centre August 2015

The Homeless Library is a project devised by arthur+martha to document the heritage of homelessness using interviews, artworks, poetry. It is supported by the Heritage Lottery Fund.
Posted by Philip Davenport at 04:44