Our project Making Memories touches on the theme of high days and holidays this year. One of the highest days you could get, in many Mancunian people's experience, was an outing to Belle Vue, a kind of prototype theme park which opened in the 1930s and continued to be an iconic part of many lives until late 20th Century. Here, a group conversation about Belle Vue is made into a cut-up poem. The writer, Michael, has a visual impairment and so arranged many of the cut-up lines by touch (see our blogs about cut-up earlier this year). The result has all the hurly and hustle of a busy fairground... 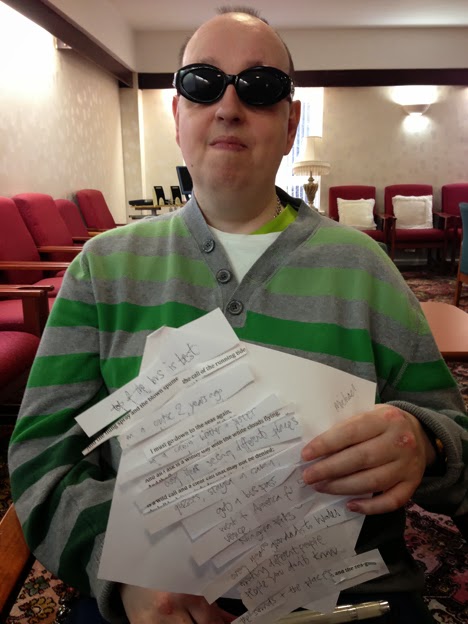 motor racing, wrestling
a scenic railway
a rowing boat
all the rides and that
only a kid
speedway Saturday night, Saturday night a shilling
bikes speeding Saturday evening happiness
(I like dancing but he was hopeless)
Belle Vue Aces, hotdogs yeah
went with school
get the tram to see the animals
two fellas knocking hell out of each other
a lot of things to do when I was a kid
10 Pin Bowling, Slot Palace, Miniature Railway
in a cone, ice creams, cheap in them days
last century
performing animals, people chatting
amusement park, know  what I mean?
big building with music inside
reserved seats, undercover
International Wrestling 7pm, a bar
Slot Palace, remember Speedway
Huge Fun, amuse
me brother, me sister, me dad, me
in the 1970s a bit of sugar, a movie show
all the attractions colourful, noisy
Daleks flashing lights
a red machine, sat inside
a full day out, morning til evening

Posted by Philip Davenport at 07:30