We’re putting together a set of creative ideas for people to use when working with reminiscence boxes, for the project making memories. We’re trying to devise ideas for people with a wide range of abilities, including folk with physical and mental challenges. Today the power of what we’re doing hit us with colossal force, quite by accident. 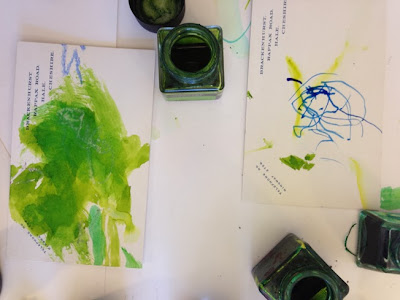 Our afternoon session is at a respite home for older people for those with dementia. One of our group is wheelchair-bound and trying to cope with a very severe degree of physical damage, including the after effects of a stroke and an ongoing degenerative condition devastating her motor skills. 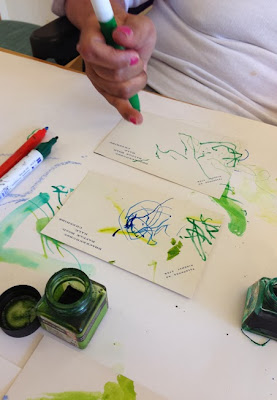 This week, she was making art, sitting next to a man who was struggling with a certain amount of bafflement, but fought back with a cheery demeanour. He relaxed her. We were inviting people to make miniature sea drawings. (They subtly recall the work of artist Susan Hiller who is a guiding light for this project.) While listening to a soundtrack of the waves crashing, she entered into the exercise deeper and deeper, fully absorbed. Lois gently coaxed her and the chap beside her gently joked. We didn’t really think anything of it, apart from being pleased that she’d had a good time despite her difficult situation.

After the session ended we were introduced to her relative who is also her carer, a lady on the brink of tears: “This is the first time she’s put anything down on paper in two years. I can’t believe that this has happened. I’ve bought paint, paper, pens, canvas. She won’t even talk to me. She hasn’t been like this in so long! I love her, I’d do anything for her but she just won’t respond. I can’t believe that she’s managed to do this, it’s a massive achievement... ”

As she wept, I realised that this was both for her sadness and relief. What was at stake wasn’t simply a few marks on a page, or lines in a poem. It was a human release; a jailbreak from despair and defeat. 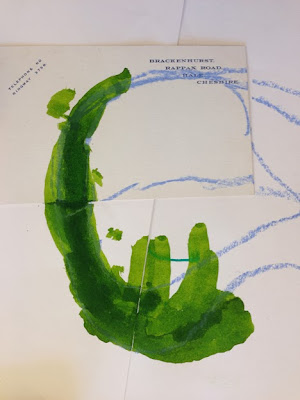 Posted by Philip Davenport at 04:06