The following article about our project the warm /&/the cold is from The Big Issue in the North magazine. Dawn Bunnell writes:


VENDORS TELL THEIR STORY THROUGH TEXTILES


The traditional arts of patchwork quilting and embroidery are being used to record the experiences of Manchester’s homeless community.

the warm /&/the cold  is a project run by arthur+martha arts organisation, led by poet Phil Davenport and artist Lois Blackburn.

Created out of denim fabric, the quilt is made of denim from recycled pairs of jeans - twenty-seven in all - embroidered with personal descriptions of when a homeless person was warm or cold. 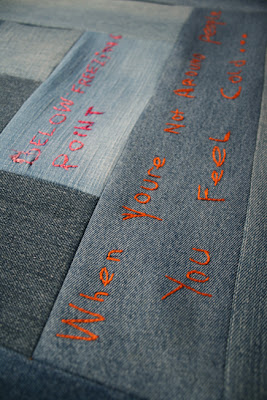 The project began eight months ago and has taken arthur+martha right into the heart of Manchester’s homeless population working with vendors from The Big Issue in the North and also people using the Booth Centre. The project gathers together artwork, poetry and interviews born out of spending time listening to the life experiences of people living on the streets.

Poet Phil Davenport said: “The quilt is created by asking simple questions that have complex answers – when were you warm? When were you cold? They lead into the whole area of homeless experiences. Physical warmth and extreme cold, but also emotional warmth, or being left out in the cold of rejection.

“We work with people who wouldn’t normally get heard, yet have a lot of wisdom. Many people who live outside of society see what’s going on more clearly then everyone else. People we've met also have great humour and resilience, which is an inspiration to me personally.”

The experiences are written onto the fabric by the homeless people themselves, who have also helped embroider their own words, with support from students from Manchester Met University.

Once the six by nine feet quilt is completed, it will be displayed alongside a range of other quilts made during the project at the university’s Holden Gallery, from 3 December for two weeks. These quilts will then be donated as housewarming gifts to people who are being rehoused.

Phil said: “The quilts are traditional, but also represent warmth, hospitality and the home - and the stories they tell are preserved through touch. It's a very ancient ritual we've tapped into, the passing on of personal histories.”

Little animations featuring lines from the big quilt are being screened throughout November and December on Manchester’s BBC Big Screen outside the Triangle shopping centre and on Liverpool's BBC Big Screen.

Phil added: “It has been wonderful to do this; we were moved and honoured to hear the stories. And the project has obviously been a big deal to the participants, one guy we spoke to had his files lost by the DSS, he felt invisible – he told me working with us made him feel visible again. A woman today kept saying how joining in with this had boosted her confidence, just a bit of talking and sewing. Sometimes it's the little-seeming things in life that are the biggest.”

Exhibition of quilts, ceramics and prints the warm /&/the cold at The Holden Gallery, Manchester Metropolitan University, starts 3 Dec 2012.

Posted by Philip Davenport at 11:53

Email ThisBlogThis!Share to TwitterShare to FacebookShare to Pinterest
Labels: exhibitions, homeless, The Big Issue, The Booth Centre, The Red Door, the warm and the cold