(Lois writes) As part of my project working memories I attended the Buxton Memory Cafe, run by the Alzheimer's Society Derbyshire. It's a welcoming group of people, health staff, representatives from the Alzheimer's Society, Carers and people with dementia. Over cups of tea and plates of biscuits I catch snatches of conversation; people sharing their troubles and grief, mixed with laughter and empathy. 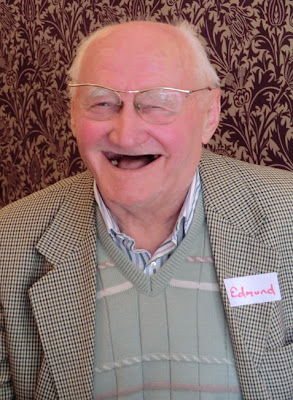 One of the joys of our work is not knowing who you are going to meet, and what you are going to uncover. This week two of the participants included Edmund and his daughter Margaret. Edmund was among a previous wave of Polish people who came to Britain:

Came over after the war, went to Stirling the Barracks a long time ago. National Service, sent to Germany, France then Britain, no English when I came here. Tarnowskie Gory, been back to Poland quite a lot, would take sheep skin coats, boots, woollen garments, anything warm. The family was very poor, would send coal money and presents for everyone when we visited.

He seemed delighted to look at photos of Tarnowskie Gory via Google Earth, the ipad comes into its own in these sessions, with instant visuals. Another picture was formed of his home town when his daughter explained:

My mother lost all her family in the war, the Jewish people in the village were hung up by their tongues on wooden lampposts. My mum ended up in Belsen. After the war (she wasn’t Jewish) she chose to go to Brazil, but ended up with friends going to England. She worked in a Mill in Stockport, she wouldn’t speak about the war. 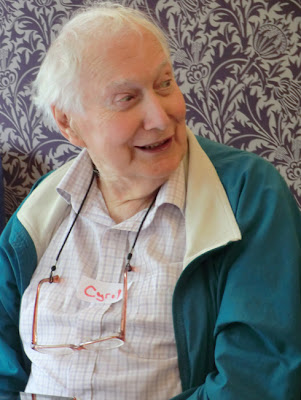 It was lovely to see Cyril again, his wonderful sense of humour bringing a lightness to the group, cut through at times with the grief of recently loosing his wife. Our theme for the session was money, and it just happened that Cyril was a retired Bank Manager- a very different description to that of current banks...

Girls had to work hard on the farms, and in those days the farms were passed to the boys, women didn’t have their names on the deeds- always the men. My wife didn’t have her name on.

I was a bank manager, most of my customers where considered friends, would visit them all over the country.

Not a lot of people had people had bank accounts when I started, had a customer who had his money in a tin box under a slab, in the farm barn. Would bring the notes into change them every now and again when the notes were discontinued. Started in 1942 used pen and ink, we were one of the last branches that changed to machines, so cold in our office. Very poor money to start with, 27 Shillings week when I started 1942 got married at £400 a year. The manager said the sweepers at Ferodo with over time had more money than him. You never expected to leave the bank, you’d have to run off with the chairman’s wife to get sacked.

Gave my wife £10 a month into her private account to spend as she wanted, that went on till 6 months before she died. She hardly spent any of it, so easy -going.