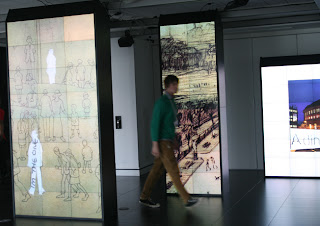 On Friday we launched the I LIVE TEMPORARY exhibition at MediacityUK in Salford, which is the broadcasting hub not just for our city, but much of the UK. A group of people who use The Booth Centre homeless drop-in were among the invitees. They've been involved in the making of these pieces and many have lived the life the the exhibition reflects upon. These are their comments, along with some visitors' thoughts: 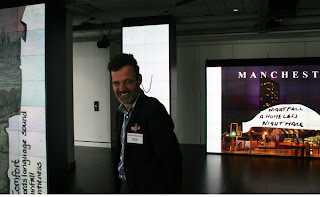 "Really fascinating to see all this when we're on the streets ourselves. When we come into the Booth Centre of a morning, half of us are half-asleep. We live rough, there's no airs and graces with us or with you when we're all talking. Then to see this... I've come awake this afternoon. It feels very true. Amazing to see yourself reflected for other people to see and hear. It's a big boost, really is.” (Keith)

“It's giving people a bit of confidence. Giving us confidence. What else would we be doing on a Friday afternoon? Nothing. Thank you for listening. Not a lot of people would.” (John) 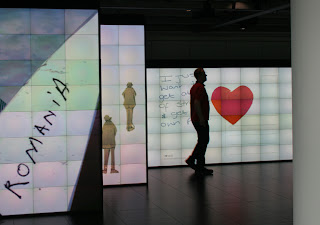 “Good to see the exhibition here, where the BBC live. It's short and simple, makes a good impact. People can learn what we're about. But does anyone stop and listen? This exhibition should be a programme on the telly. If it was up to me I'd bring school kids to see it. No one learns except when you're at an early age. They need to realise times are changing in the so-called First World. People go on protest marches for jobs and pensions now, but soon everything will be done by machines. One future day, they'll be jobless and homeless just like us.” (Yvonne)

"Do people want to hear this? I don't think so." (Anonymous, participant)

“Really good that people get access to the space and feel entitled to be here. After all it's a public space and we are all equal citizens. Hearing your own voice, interacting with your own words, people see themselves in a new way. It's slick, but not distancing. It looks good, displayed to a high quality. But it's not corporate, or intimidating.” (Harriet, organiser)

“Aggressive beggars, predatory people, charity muggers... I could spend all day talking about this exhibition and the issues around it. Part of me thinks when it comes to art from a vulnerable group, it's twee voyeurism. Oooh look at the poor homeless. But I think this is important. If no one publicises these things, people will be stuck with their prejudices – the undeserving poor rhetoric. The Daily Mail. I've known a few homeless people, people who fell through the cracks. Those who don't need the help so much can deal with life, but the ones who find it harder to cope are the ones who fall through.

“If you want to connect to the population who live in lofty places, the people who never think of these things, then you need to get this publicised. Pick a few good images and put them somewhere lots of people will see them. Perhaps they'll look twice.” (Ben, visitor)

"It makes me wonder - should all art be political? This is political in the broad sense. Not party political, but political because it makes you want to do something to create a change." (Anonymous, visitor)

“I think this is brilliant, brilliant. Emotional for me. It makes me think about the people who can't see it. I've buried a few.” (David, participant)

If you would like to see more photos from the day please visit http://www.flickr.com

Posted by Philip Davenport at 09:38