The following is a conversation noted down at the Buddy Cafe, Salford with a carer whose brother has a dementia diagnosis. These interviews will form part of a collection of work which will include poems and artworks, finding creative ways to inform us of life with dementia and as a carer. 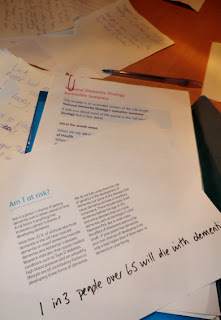 What I found difficult watching was the stresses and strains on D's family, waiting to find the diagnosis. Whilst you're waiting for the diagnosis, you can't get benefits, not the right benefits anyway. It took too long, it took 12 months to get a diagnosis.
He had a couple of strokes, they demoted him at work, then made him redundant. It was unfair dismissal, they said he was a danger to the firm - they should've pensioned him off. He had to sign on for Job Seekers, but he wasn't fit to work. He wasn't fit to apply for jobs, his wife was having to apply on his behalf for jobs he couldn't do anyway. The stresses it put on the family, he should have been on the sick.
Over three years ago he was diagnosed and this Saturday, they sent him for a medical to prove he could still get his benefits. His doctor said it was obvious he wouldn't be working again. The stress of the benefits, and he would just say he's ok if asked.

My dad's had strokes too, been like that for 11 years, so I'm used to it. I've got closer to my dad since it happened and closer to D. I've learnt about him, his history, his lifestyle. My brother is only 57 now, 54 when it started. I always thought dementia was a older person's disease. I worked in Neuro Surgery, so I picked up a lot with his wife early.

I worry because I have memory problems. I had a mini-stroke 5 years ago, I have Fibromyalgia as well. Sometimes I look at D and say: 'I haven't got dementia have I?' Our great grandmother she was 88, she had it. I'd like to know more about the genetics.

The dementia won't kill him, I just don't want to see him go to the state of not knowing what's going on around him.

People think its easy being a carer. It's not, it's 24/7. I've seen the stress on his daughters.

When I'm well I help. I need distraction, have a laugh, feel like I'm doing something. I'm learning from them. Learning about dementia, about their past, how these people lived their lives. They're human beings: the young have a lot to learn from them.

A lot of people have turned their back on D, he doesn't have many friends anymore - they're embarrassed? I can't speak for them.

The GPs have been very good, and the practice nurse, because they know him. They should automatically get their D.L.A. it shuld be easier for them to get their benefits for life, to save the stress for the whole family.

I just treat D normally, he's just my brother, to be honest we didn't even get on when we were younger, he was always a man's man. My dad's good with him, they're the same.

I've had a lot of fun here, lots of laughter, that's why I come back. Children accept the dementia, it's just normal to them.

You want to protect them. A lot of people ignore it or pretend it's not there. I know I'm contradicting myself as I treat D as normal, but I know it's there. I don't treat him like an idiot. D can be hard work, but he just wants company, especially since his wife died. Imagine bringing your children up, then your wife dies and you have got this disease. I worry about that, what's going to happen to him. I can't physically look after him, I've got my own health needs.

For more information about dementia you can visit: http://www.nhs.uk