A brain of a dream of a dog

Our first workshop in Warrington with young carers and children from Women’s Aid, mostly pre-teens, took place last Friday. An ice-breaker for all of us, we let the participants steer much of the session, building trust and emphasising playfulness. By getting a sense of the group when they were relaxed, we were able to gauge how they might be able to explore more deeply.


The art-room in Warrington Peace Centre was set up with separate spaces for five different exercises, plus extra materials from Derek (Warrington Museum and Art Gallery) who had commissioned this initial workshop and came to lend his support. We would try overwriting, fold-in and some variants on concrete poetry and collage, using pens, postcards and stencils.


The intention was to build on this session in order to run further workshops focussed on text/art self-portraits. It was also a chance for Derek to see us in action and decide if our approach fitted the group. Because the first session was on the doorstep of Halloween, the young carers arrived in their finest, witchiest costumes and face-paint. We decided to busk along this theme, using the excuse of spookiness to explain the weird effect of some of the pieces.
Overwriting (a la Bob Grenier) combined with ‘wrong hand’ writing, was used to create badges with a 50s horror movie flavour. We hope to come back to this ‘wrong hand’ technique again, with the group exploring the push/pull between positive and negative self-image. Badges are a form of self-labelling; these ones were essentially fancy dress, the equivalent of a ghost mask, but the same method can be used to go deeper under the surface. For this day, the big success was the enthusiasm which met these little bits of mini-writing. An industrious girl made six badges and clinked as she walked away at the end of the afternoon.
The concrete poem faces were very simple, game-like. Again, this was an easy way into a technique that is extraordinarily expressive; we will return to it. One of the delights was that a young girl F who had literacy problems was able to make a witty poetic piece, completely unhampered by (and unaware of) her spelling.
F also contributed beautifully to the largest piece of the day, a cross-section of a brain that people wrote dream fragments into (this was the fold-in writing). F wrote a short sentence, needing letter-by-letter guidance. “What else can I do?” she asked.
“Can you draw?” I enquired.
Not only could she draw, but was bursting to do so. She was joined by Kitty, whose specialty was drawing dogs. And so the brain became a figment of a dreaming dog’s imagining, filled with further dreaming dogs, dream bones, cats up trees, a cat and crossbones, and a doggy spiel written by the irrepressible Billy. A brain of a dream of a dog was a piece of splendid whimsy, co-drawn-and-written by roughly ten of the group. Co-operative pieces like this tend to be unwieldy, but are great to get a group working as a team and also quieten criticism. 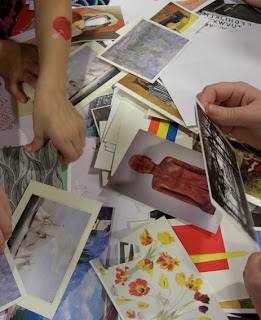 The collage-making produced some of the most subtle pieces of the day, recycling postcards into little dioramas with intriguing perspective shifts and lush textures. The makers of these pieces also seemed to be the most introspective, moving quietly into the imagined space of their postcard worlds. 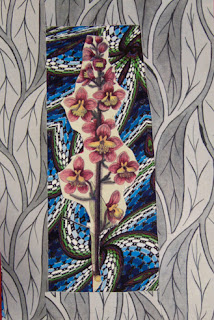 The workshop was a very joyful day of silliness and messing, with a serious undercurrent. We were very aware of the backgrounds of the young people and the thin ice that some of them walk across day-to-day. The question is: how to develop the exercises, to reflect this experience without intruding?
For more images please visit http://www.flickr.com


We will run number of one day workshops, relating carers' experiences and emotions in a creative manner. This will link this to the exhibition at Warrington Museum and Art Gallery by American street artist Elbow-Toe who creates collages and prints depicting the emotions of the inner person. We will use portraiture combined with poetry; work will be displayed in the town centre and/or gallery.

As with our hospital work, the pace of exploration will be determined by the participants themselves - it’s their choice. Enthusiasm is a key in all this and so we will revisit the things that elicited the best responses to see where they lead. The badges are a particularly popular activity and can open out into various kinds of writing and self-portraiture, including photography, so they will feature. The group piece was a gand way to gather all the ages and abilities into one space and we will experiment with this further, with a tighter brief. We hope to visit the Elbow-Toe exhibition with the groups, to focus our work and move it into an introspective mode.