Wang Jun is constructing a miniature city skyline on his studio floor. The buildings are made out of street bric-a-brac moulded into cylinders and bound together with a light concrete. Little pieces of plastic and electronic wiring are trapped in the concrete like fossils. Each unit is roughly the size of a corporate chain coffee cup, grande size. The heights vary from a couple of millimetres to 6 inches. He uses them to mark out an approx S-shape curve on the floor.

“S for Sheraton?” I suggest. “Starbucks?”

He looks at me wryly and starts to speak, Deng Chuan translating the gaps in his English and my Chinese: “It’s the yin yang. Very ancient, a shape for change. The piece is about change Fei Li Pu, about China changing. The line is buildings, maybe. Or could be a river. If you look at floor level, they could be a mountain range. It is a line drawn in 3D.”

Closeup, they are exquisite, the bright plastic fragments frozen amongst the grey. They are a sequence, but each one is an individual. “Like people,” says Wang Jun. “Or buildings, concrete and metal social units. But the materials of people’s lives are not industrial. The piece is gentle, small-scale - it is also very cruel, I think. Some people say the thing that hurts most is not a blow, but cruelty that is delivered gently.”

Wang Jun shakes his head and talks to Deng Chuan who relays: “He says, they belong on the floor, it’s where the rubbish that made them comes from. After the exhibition, they will stop being art and they will be rubbish again. He says he wants his work to be gentle but within that it is cruel.”

Why cruel? But Wang Jun doesn’t answer directly. Deng Chuan says: “You know in China, balance is very important. Maybe this is something we can teach your culture. I don’t agree with the purely economic way and most Chinese don’t. But for a long time we have been poor, so new we grow up to be strong. We won’t be like Africa – we use the economy to arm ourselves. We have been poor and sick for 100 years and our people are afraid, they need to build confidence... But now the living standard is not so bad, I think that some people need to try living a different way, that is not just about money. Wang Jun feels this too, that’s why he uses the Yin Yang – we need some living one way and some living the other.”

What about the disastrous ecology summit at Copenhagen? “In China,” says Deng Chuan, “people care about their balance with nature, they have done for a long time. It is in our tradition. But they have been so poor and now they want to have a good life.”

“In China,” says Wang Jun, “They knock down poor people’s houses and put up buildings like this - ” and he nods at his little city on the floor. “They build on poor people’s lives.” We study it awhile. “A soft line to show hardness.”

The line begins and ends with the smallest pieces, broken fractions, so that it seems to grow up from the floor and sink back into it again. For me, it becomes an eye-metaphor for time – you don’t know if it’s coming toward you, or rushing away.

Wang Jun’s new work will premier at the Chinese Art Centre in Manchester as part of an exhibition which opens mid-January 2010. 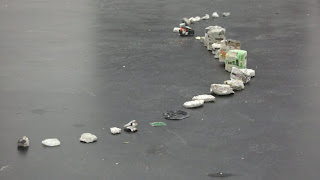