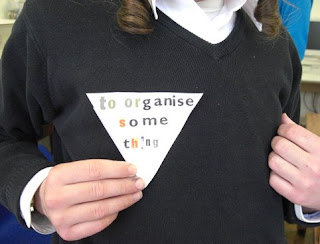 As part of the 'Eyebright' pilot project during our artist residency at Delamere Forest School, we looked at the 8 Stages of Genocide, for direction and inspiration.... Stage four is Organization:

4. ORGANIZATION: Genocide is always organized, usually by the state, often using militias to provide deniability of state responsibility (the Janjaweed in Darfur.) Sometimes organization is informal (Hindu mobs led by local RSS militants) or decentralized (terrorist groups.) Special army units or militias are often trained and armed. Plans are made for genocidal killings. To combat this stage, membership in these militias should be outlawed. Their leaders should be denied visas for foreign travel. The U.N. should impose arms embargoes on governments and citizens of countries involved in genocidal massacres, and create commissions to investigate violations, as was done in post-genocide Rwanda.

Quotes from The 8 Stages of Genocide by Gregory Stanton, President of Genocide Watch.
Posted by arthur+martha at 01:57